CLC Striders have been busy competing since the Cotswold Way Relay, ensuring a strong finish to June and start to July.

In the Boddington 10k on Sunday 25 June, vets Paul Northup and Gordon Bendall represented the club, clocking 38:52 and 50:29 respectively.

On Tuesday 27 June, three Striders made the trip down to Bristol to compete in the final Aztec 5k race of the series. It was a good night for all three, with Sophie Longmore continuing her rich vein of form with a sub-20 PB time of 19:55, Patricia Sturgess just outside her PB in 20:28 and Andrew Gage – who has run most of the Aztec series this year – rewarded with a PB time of 21:51.

On Wednesday 28 June, club nomad Rich Shardlow ran in two events at the Perivale Open meet, clocking a new club age category record for the mile in 5:32 and later on the same evening managing a very strong 18:36 in the 5,000m. 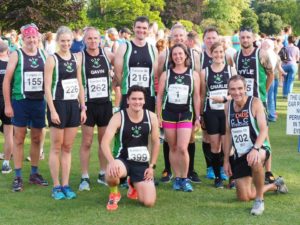 Attention now turns to the track in earnest and the Cheltenham Harriers midsummer open meetings at the Prince of Wales stadium throughout July.