Saturday 24th saw CLC Striders enter three teams into the iconic and much-loved Cotswold Way Relay. Now in its 25th year as an event, this year, once again under the expert coordinating eye of Liza Barry, the club gathered a ladies team (the Gazelles) and two mixed teams (the Eagles and Cheetahs) – of all abilities and specialisms – to tackle the ten-leg course from the north to the south of the beautiful Cotswold Way. Starting in Chipping Campden and finishing in the centre of Bath, this is a local race like no other and all those who competed had a fantastic experience.

Standout performances of the day came from Karlien Heyrman, lead-off lady for the CLC Gazelles team, who was first lady home on Leg 1, marking a remarkable return to fitness and form after a long lay-off with injury through last winter. Meanwhile, Nick Barry was the first finisher on Leg 5 – continuing his supreme record in the event, having won most of the legs he’s competed in over the years. 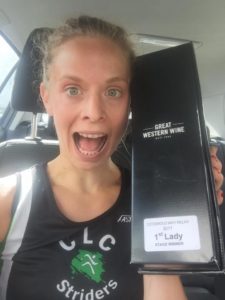 In detail, the legs and performances broke down as follows:

The early starters on Leg 1 from Chipping Campden to Stanway were Karlien Heyrman for the Gazelles, Jon Howes for the Cheetahs and Nikki Smith for the Eagles. Jon finished in a very strong 12th place, Karlien was an incredible 19th overall and first lady home, and Nikki secured 78th. CLC Striders were up and running.

On Leg 2, from Stanway to Cleeve Common, Billy Bradshaw brought the Cheetahs team home in 33rd place, with Rachel Vines in 40th for the Gazelles. Dawn Addinal battled through for 110th place for the Eagles. Two legs down, eight to go!

The next leg, Leg 4, from Seven Springs to Cranham, saw the club manning the water station at Crickley Hill as part of their commitment to the event – as well, of course, as running it. Filling in at just 12 hours notice, new club runner Ed Collier finished the leg in 41st place for the Eagles, with club stalwart Rob Bircher in 43rd for the Cheetahs and Patricia Sturgess in a strong 46th place for the Gazelles. Undoubtedly the best bunched finishes across all the legs from these three CLC athletes. 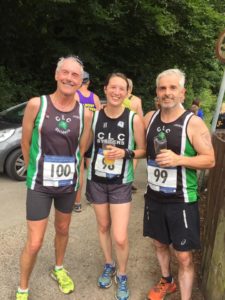 Leg 5, from Cranham to Ebley, saw Nick Barry take his prestigious first place for the Eagles, with Amanda Steer finishing in 50th for the Gazelles and Jill Hooper bagging 88th spot for the Cheetahs.

Leg 6, from Ebley to Dursley, saw club veteran and trail specialist Charles Goodwin come home in a fantastic 13th position overall for the Cheetahs, with Sophie Longmore continuing her recent good form in 33rd for the Gazelles and David Street in 84th for the Eagles.

On Leg 7, from Dursley to Wotton-under-Edge, the Gazelles were brought home by the ever-dependable Ameila Mullins in 33rd place, with Kyle Sollars getting 65th for the Cheetahs and Carla Quiringhetthi finishing in 79th for the Eagles.

As the race moved ever southward, Leg 8, from Wotton to Old Sodbury, saw Chris Driskell finish in a very strong 13th place for the Cheetahs, with cross-country specialist Helen Hucker bagging 39th for the Gazelles and Philip Abbey finishing in 77th place for the Eagles.

The penultimate leg, Leg 9, from Old Sodbury to Cold Ashton, saw the teams’ organiser Liza Barry take to the trails herself to bring the Gazelles home in 31st place, with Adam Cary in 46th for the Cheetahs and Mike Speke in 87th for the Eagles.

And finally, bringing the teams down into Bath City centre from Cold Ashton, on Leg 10 Alex Monro brought the Eagles home in an exhilarating 17th place, with Hannah Monro completing the last leg in 70th place for the Cheetahs and Charlie Haward finishing for the Gazelles in 82nd place. 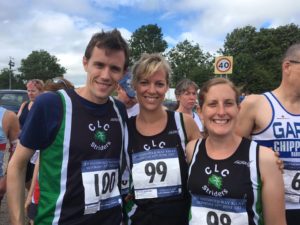 In the end the all-ladies, all-abilities, Gazelles team finished in a superb fourth place in a tightly contested race, less than an hour behind the winners over the 10-leg, 100-mile or so course – a very slim margin indeed. While, in the mixed team races, CLC Cheetahs finished in 17th position and CLC Eagles finished in 31st – once again, really strong placings in a field of some 50 or so mixed teams.