Early June has seen CLC Striders competing in a wide range of events – from Hull to California. 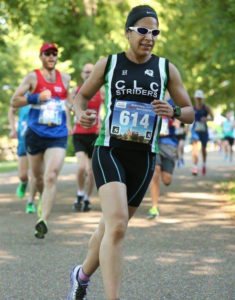 Sophie Longmore has led the way with a couple of cracking performances – as seventh senior lady in the Clevedon Midsummer 10k in a time of 41:41 and then third lady (and second in her age category) on a hot and undulating Shrewsbury Half Marathon course on Sunday 18th June in a time of 1:33:47. On the same steamy day, Clark Lawson competed in his hometown 10k, completing the Hull City course in 47:05.

In the week before, a handful of Striders raced in the Cirencester Park Summer Sizzler 10k on Wednesday 14th June. Fast-improving Alex Monro was 14th man home in a sub-40 time of 39:17. Ever-consistent Amelia Mullins was first in her age category in a time of 44:24, while Hannah Monro was 17th lady in 47:56. Mike Speke clocked 52:55 and Jill Hooper 54:09 and the CLC Ladies team achieved third place overall on the night.

In other news, Charlie Haward bagged herself a Parkrun PB on Saturday 10 June in a time of 24:38. And Bradley Coates checked out the Bath Skyline Parkrun.

Meanwhile, on the West Coast of America, Strider Rich Shardlow recorded perhaps the club performance of early June in a 5k road race in San Diego, clocking a very nippy 18:34 for 15th place, finishing first in his age category as first Brit home!

Elsewhere, Striders have been out in groups up and down the Cotswold Way as they prepare for this Saturday’s Cotswold Way Relay race – a favourite team event for the club. This year, the club will once again put three teams out to do battle over the length of this beautiful footpath, from Chipping Camden to Bath in ten legs.