Will Ferguson made his debut over the full marathon distance on Sunday 28 April in London’s iconic event. It turned out to be quite a debut. Clocking 2:30:20, Will smashed the club’s record for the distance, finishing only just outside his ambitious target time of 2:30:00. Not only that, he finished 92nd, inside the top 100, an incredible achievement on his first outing over the gruelling distance.

Over the next 10k, however, Will started to cramp up, reaching 40k in 2:21:59. With just over 2k to go, he dug in deep, pushing through the pain, to finish in 2:30:20, just 21 seconds shy of what would have been an incredible achievement in an event which requires a few outings over the distance to gain the learning and experience, as well as physical endurance, in order to deliver your best performance.

Will’s London marathon time marked the culmination of a superb last 12 months of running for the athlete which have seen him set new PBs for the 800m, the Mile, 10k and Half Marathon distances.

Other club runners competing in the London Marathon on the day were: Mark Fuller, who clocked a solid PB time off metronomic pacing to finish in a sub-3-hour 2:58:06; Sarah Wilson, who knocked 40 minutes off her previous best to finish in 4:17:42; and distance debutante Chris Thomas, who had battled through illness in the latter part of his training period, to achieve 4:48:04 on the day. 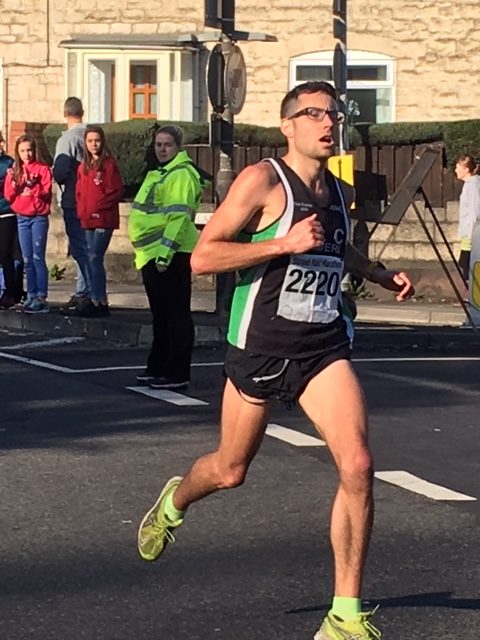 Will Ferguson strides to a new club record in his debut marathon, wearing his trade-mark lucky shorts