Gloucester 20, Yeovil Half and the first Filton Flyer 5k

In perfect conditions, after so much mixed weather, four CLC Striders’ men lined up at the start of the annual Gloucester 20 to compete over the three-lap course to the south-east of the city, around Haresfield.

Three of the competitors – Will Pearce, Jon Howes, and Mark Fuller – were nearing the peak of their London marathon preparations and so the 20-mile distance proved the perfect test for them as one of their last long runs before the big day in London. While long distance specialist, Gavin Jerman was competing too, only a few weeks after running the Berkeley 20-mile race in gruelling conditions – glutton for punishment! 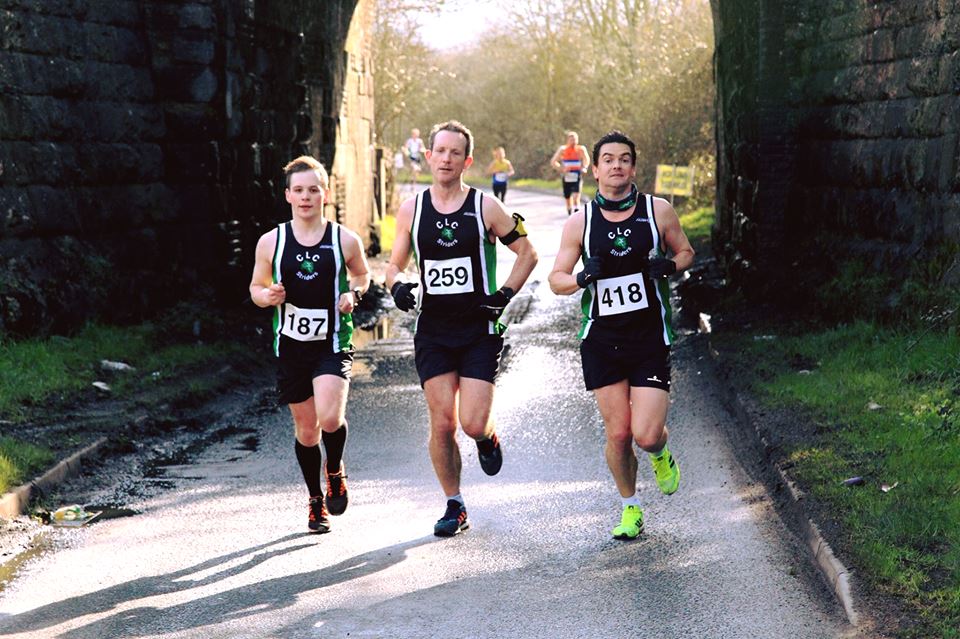 Three in a row. From left to right: Mark Fuller, Jon Howes, Will Pearce_

The undulating course started around the closed roads of the town centre, before heading out into the grounds of the National Trust’s Montacute House via the entire length of Yeovil Country Park, before returning uphill on quiet country roads and back to the Town Centre finish.

Pleased that fair running weather conditions had returned, Sophie made it home in a chip time of 2:00:13, placing 72nd female and 816th overall. An amazing achievement before hanging up her racing shoes for a while in readiness for her new arrival.

On a cold and windy Tuesday evening, two CLC Striders – Clark Lawson and Joel Freeland – made the journey south to Bristol to compete in the first Filton Flyer 5km road race, hosted by Bristol & West AC.

This event was the first in a new series of races replacing the hugely popular Aztec West series, which had seen many Striders achieve new PB in the past. This new course used the footpaths and cycle paths around the perimeter of the Abbeywood MoD base.

Starting uphill, course proved to be a fast one – looping around twice, with one added section back up the hill and final U-turn to the downhill finish. The paths were relatively narrow, with fences and bushes on both sides, adding the perception of speed when racing.

Race HQ was at a nearby Fitness Centre, with changing facilities, lockers, toilets, and even an up-market coffee shop. Luxury compared to usual race facilities!

The start was at 7.30pm and as the large field set off, it was clear that the numbers of faster runners would help pull everyone along to fast times.

Continuing his recent rich vein of improved form, Clark Lawson crossed the finish line in 31st place in his first ever sub-19 minute 5k (a new PB) in a time of 18:47. While Striders’ Men’s Captain Joel Freeland, fresh from an impressive display in snowy conditions in the spring Midland Road Relays, wasn’t far behind in a confidence-boosting 36th position and a time of 19:16 – his fastest 5k road time since 2011.

Both Clark and Joel enjoyed the event and hope to see more Striders make the short journey to Bristol for the next in the new series of Filton Flyer 5ks (on Tuesday 24th April).