On the morning of a record turnout for Cheltenham Parkrun on Saturday 29 April, Striders Jon Howes and Paul Northup finished in 10th and 11th place respectively. Northup ran a Parkrun PB of 18:46, finishing just behind a strong Howes, while the fast-improving Alex Munro came home in a sub-20-minute time of 19:23.

On Sunday 30 April, fresh from his second place with his border terrier Betty in ‘Me and My Dog’ on BBC TV, Andrew Paterson (and Betty of course!) competed in the grueling canicross Pembrokeshire trail marathon, completing the stunningly beautiful cross-country route in just under six hours.

On Bank Holiday Monday, veteran Strider Gavin Jerman surprised his team-mates by running the Milton Keynes marathon. Having kept his entry a secrefrom the club, Jerman clocked a solid 3:46:21, just a few minutes outside his PB. 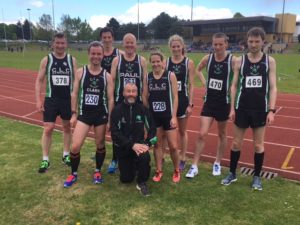 Back in Cheltenham, a posse of Striders competed in various events at the Brewer Memorial Games, hosted by Cheltenham Harriers at the Prince of Wales Stadium on Bank Holiday Monday.

Soon after, in a strong field, Greg Chilton made his track debut for CLC, running his first 1,500m and clocking a strong 4:37:2. While, in the second race over this distance, Rachel Vines – doubling up – ran well to 5:36:4 and she was followed home by Amelia Mullins and Andrew Gage, running their second races of the day, too, in 5:45:0 and 5:54:2 respectively.

The Striders team now looks forward to the County Champs track competition at the Prince of Wales on 13 and 14 May.