My Marathon Journey – by David Street

Why apply for the main Virgin Money London Marathon, get knocked back, then apply for a place in the CLC Striders club ballot for the marathon?  This is my story which tells why I did it.

On Saturday 17th December I competed in my fourth cross-country race wearing CLC Striders colours. This meant that I fully met the criteria to apply for the club ballot for the Virgin Money London Marathon, after being unsuccessful in the main national ballot.  Fast forward to the 19th December when I was in New York with my daughter (Grace) and I received an e-mail from Chris Driskell informing me that I had been awarded a club ballot place along with Charlie Haward.  I was thrilled!

My mind went into overdrive.  I e-mailed Chris “GPS ” Hale from New York and asked for his help with a training plan.  Literally overnight he drafted a 16-week plan.  As I had done Cheltenham and Stroud half marathons in 2016, Chris started me off with 12 miles as a long run.  The aim was to run 4 times a week.  All I had to do now was to follow the plan – that was a lot easier to say than to do.  My year started badly with the sudden death of my father-in-law, immediately followed by an insertion point injury in my left hamstring.  This resulted in no real training throughout January.  I talked with GPS who reassured me and told me not to worry.  Friendly and supporting advice from GPS became a constant theme throughout my training.  I was also aware that I wasn’t attending training sessions with Striders – but I regularly followed posts on the CLC Striders members’ page on Facebook.  After helping the club by marshalling at the Staverton 10-mile road race on 29th January, Charlie Haward and I did a 10 miler of our own.  It was cold, raining and very wet!  We had a close encounter with a herd of cows on the route and I was less than brave to be honest.  We agreed to alter the route to avoid a subsequent encounter with these exceptionally dangerous animals (my excuse and I am sticking to it).  I managed 10 training runs throughout January.  Less than I would have liked but I was making progress and feeling good.  The weather wasn’t too bad and I knew that I would benefit from my winter training.

February saw me and my wife (Tracey) jet off to Jamaica for 2 weeks.  I was treated to the most wonderful Caribbean holiday as a 50th birthday present.  After speaking with GPS he advised that I needed to run while out there and if at all possible to aim for at least two 10-mile runs.  The weather was a balmy 27 degrees and my only option was to run on the beach.  I managed four 6-mile runs along the beach.  The temperature, direct sunlight and sand made it hard work but I knew that I had to run.  So 6am runs it was!  I pushed hard but was aware that I was short in distance of what I should have been doing.  Almost invisibly I had become comfortable with half-marathon distance.  I never thought I would hear myself saying that!  My plan was to increase the distance that I was running gradually, then drop back a mile or two but increase my pace.  This really showed me that my endurance was improving.  Again, GPS was there to make sure my increase in distance was steady and sensible.  I began experimenting with different types of isotonic gels to make sure that I didn’t suffer any adverse effects.  February seemed like a very short month!  I managed 13 training runs throughout February – things were going well.

21st March saw me turn 50.  The weather was improving and my training was going well.  Charlie Haward asked if I wanted to join her on some of her training runs.  I was glad to accept.  She meticulously planned routes, told me where to meet and even picked me up and dropped me back home again.  It was great to train with her and I am extremely grateful that she included me in her training regime.  Charlie had suggested I enter the Gloucester 20 mile road race on 19th March – which I did.  I saw it as a key milestone.  Unfortunately though both my Mum and Tracey’s Mum were taken into hospital.  I travelled to Leicester to be with my Mum and after a couple of sleepless night and hospital visits I returned to Churchdown.  I was mentally and physically fatigued so withdrew from the race.  Looking back, that was definitely the right decision.  I would have run in a below-par physical state and having a disappointing time would have done more harm than good.  Breakfast before running was now a done deal – porridge oats, a banana, a scoop of slim fast shake powder and 400 ml of milk all blitzed up in a nutri-bullet.  Absolutely lovely and healthy too.  Having this 2 and a half hours before exercise suited me best.  I did manage a 16-mile run, 18-mile run and 19-mile run in March.  I selected Sport in Science isotonic gels as my “weapon of choice”.  They deliver 60 grams of carbohydrate.  A highlight of March was when Charlie Haward and I ran 7.5 miles to Cheltenham Parkrun, did the Parkrun and then ran 7.5 miles back.  I was please to post a 23.13 Parkrun time – only 40 seconds off my PB!  I saw Janet Mustoe post pictures of her fall when training and turning black and blue but she still got up to train for her Brighton marathon – that inspired me.  Kyle Sollars was posting onto the CLC Facebook page showing brilliant training runs and increasing his distances as training for the Liverpool marathon – more inspiration for me.  I managed 16 training runs in March.  Still feeling good and very positive.

April arrived.  Sunday 2nd April saw me join Charlie Haward for our longest training run to date – 21 miles.  It was a great route planned by Charlie that saw us run through the lovely Gloucestershire countryside of Elmore, Epney and Frampton.  Pacing was excellent and we managed negative splits too.  2 days later and I found myself with a nagging twinge in my left achilles. I visited the physiotherapist for 2 sessions and was told that I either had bursitis (inflammation of the fluid sack that cushions the achilles and prevents it rubbing on the bone) or early plantar fasciitis.  The key to preventing further injury was to rest for a week, take a series of anti-inflammatories and have a strict stretching and foam rolling regime.  I didn’t exercise for a week.  I then did a series of runs but nothing more than 14 miles.  I decided that running shorter distances at race pace would probably be better than running further but more slowly.  I did struggle to “find” my race pace – that was a lot harder to do than I thought.  Tapering was a great feeling, reducing the distance I ran but doing  tempo runs – just as GPS’s plan advised.  I was doing static stretches 3 times a day and foam rolling too.  I began to increase my carbohydrate intake 2 weeks before the marathon.  I booked an Air B&B at Blackheath which was only 10 minutes from the start line. April was a blur really and before I knew it, I was travelling to London on Saturday 22 April - the day before the Marathon.  I had my “support team” of Tracey, Grace (my daughter) and Sally Jones (A good friend).  We checked into the B&B at 11am.  I then went to the Ecxel to collect my race number.  Now it was real!  I had a wonderful lasagne for dinner on Saturday evening and had an early night.

Sunday 23rd April – Marathon day!  I got up early and true to form had my regular breakfast.  At 9am I left to walk to the start line.  The organisation was excellent.  Bag drop was easy, toilet facilities abundant and before I knew it I was in zone 5 of the blue start waiting for the gun.  Weather was excellent, a cloudy day with a temperature of 13 degrees – perfect conditions.  Surprisingly it only took me 3 minutes and 53 seconds to cross the start line.  I had thought about what running vest to wear and after agonising about it, I wore a Macmillan cancer support green vest.  I didn’t want to be disloyal to CLC Striders but Macmillan nurses were so brilliant with my Dad when he lost his battle with pulmonary lung fibrosis, and again when I had my own personal battle with head and neck cancer.  Crowds were amazing and random people were shouting “Come on David.”  Having my name on my vest was a really great thing to do.  My body just took over and went into auto pilot.  I felt relaxed and fired-up.  The sights and sounds of London flew by.  I felt so good up to 23 miles, and then things got hard.  I had to dig in and just focussed on completing the longest run I had ever started. I had lots of thoughts flashing through my mind – my Dad, wife, daughter and family.  Colleagues from the Army that had died from cancer or on operations.  CLC Striders and how much support I had received from them – all their well wishes and messages of encouragement.  I realised then that a marathon is a personal journey – I had fantastic support for which I was truly grateful – but I had to run.  The last mile was a mixture of emotions – but crossing the finish line was an amazing feeling.  I felt like a giant.  I checked my watch and my time was 3.53.53.  I was over the moon!!  It was a PB – it was always going to be as it was my first marathon.

Looking back now, a week after the marathon, I realise what a great journey and experience I had.  It seems an eternity ago when I was unable to walk from the bedroom to the toilet because of my cancer – but in reality, it was only 3 and a half years ago – November 2013.  Without CLC Striders none of it would have been possible.  When I asked Tracey to recommend a running club she immediately suggested CLC Striders (she used to run for the Striders).  So in September 2015 when I first went to a club and Monday training session and received such a warm and generous welcome from Rob Bircher, Martin Bick and Rachel Vines, I knew I had found my club.   Along the way I have PBs at 1 mile, 3km, 5km, 5 miles, 10km, half-marathon and now marathon.  Training sessions on Monday and Wednesday are so worthwhile.  Chris “GPS” Hale and Martin Bick know how to run a session!  You always get a warm welcome and feel part of something.  I saw a different side of Brendan Ward when I attended cancer rehab sessions and also when I volunteered to run in the 2016 cross country events.  I remember crossing the line on my first cross country course and getting a big pat on the back from him – literally – and him shouting “Well done Davey boy”.  I am only an average runner but felt quite special!   Rachel Vines and Chris Driskell devote themselves to the club and Karlien Heyrman organises wonderful social functions!  My mentor has been Chris “GPS” Hale.  One of the most generous and genuine people that I have ever had the good fortune to meet.  What an amazing gentleman – and I owe him a personal thank you.  He never stopped believing in me or encouraging me.  He was never too busy to chat with me and offer his advice. I am so glad that my CLC Striders experience is set to continue.  Another week’s rest and I will be back at training with my fellow Striders.  Collectively a brilliantly talented and generous set of people.  Go Striders!! 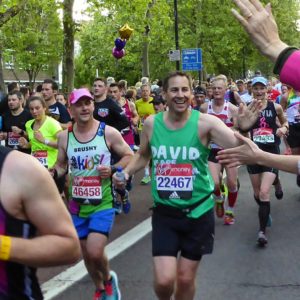