A busy weekend of racing saw CLC Striders racing on the track, road and country.

In the Gloucestershire County Track and Field Championships held at the Prince of Wales Stadium on Saturday and Sunday (13 and 14 May), Striders focussed their attention on the 5,000m to good effect. In the first race, Sam Baylis acquitted himself well once again, finishing in a strong sixth place with a fast time of 17:12.5. In the same race, Chris Driskell, who has struggled for form in recent weeks, posted a time of 18:13.5. 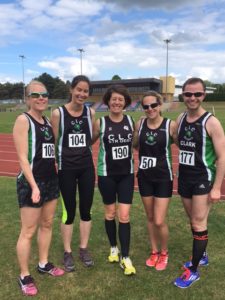 In the second 5,000m race, Rachel Vines continued her solid early season form on the track with a second place finish in 19:03.5. Clark Lawson finished in fifth place in 19:48.6, his first ever sub-20-minute time for the distance. While Amelia Mullins continued her rich vein of form by finishing sixth, just pipping Cheltenham Harrier Jo Wilkie to the post in a time of 20:26.9. Gradually returning to full fitness, Amanda Steer clocked 20:51.9 and Helen Knight, making her track debut for the club, bagged 21:00.3.

Club talisman Will Fergusson stormed home in first place in the 1,500m winning a gold medal on the day in an impressive time of 4:19.7. Andrew Gage clocked 5:49.0 for the three and three-quarter laps.

Away from the track and across the country, club strongman Iain Porter continued his quest for the more unusual events by earning a brilliant first place in the “Bulmers Bash”, a 10k-ish romp through some very hilly orchards. His prize? Some cider, of course.

While, over in Tewkesbury four Striders lined up on a warm and blustery Sunday morning to compete in the Tewksbury Half Marathon. They were led home by the young and emerging talent Greg Chilton, who finished 10th overall in a time of 1:23:16. Second finisher for the club was male vet Paul Northup who, despite fading badly in the second half of the race, held on for first place in his MV50 category with a time of 1:26:54. Sophie Longmore made a great return to road racing after a few years away, finishing as fifth senior lady in a time of 1:33:32. And Amy Underdown completed the 13.1 miles in her target time of 1:51:23, finishing as 30th senior lady.

Looking a little further back, to Sunday 7th May, Striders Rob Bircher and Emma Abbey competed in the tough Stroud Trails Half Marathon. Over a hot and hilly course, Bircher finished in 31st place in 2:05:53 and Abbey came 56th in 2:17:18.