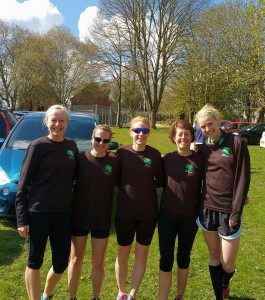 A host of CLC Striders ran the undulating Angels 10k race on Sunday 17 April, the latest race in the Gloucestershire road race series.

Women’s captain Rachel Vines set off confidently on this scenic course but was soon passed by her teammate, and relative newcomer to the distance, Karlien Heyrman, who ran an even-paced race to lead the Striders ladies home in 42:36, for second senior lady and 26th finisher overall.

Close behind a battle unfolded between Striders Amanda Steer and Amelia Mullins, who swapped positions over the challenging course and pushed each other on, with Steer claiming first Vet 45 spot in 42:50 (27th overall) and Mullins running a determined 42:58 (28th). With excellent packing from the ladies’ team, Vines held on well for 44:03 (39th), before Rebecca Reynolds came in with a pleasing 48:44 (65th).