CLC Striders made the long trip to Warwick University worthwhile as they came home with medals galore following the fourth and final fixture in the Gloucestershire Cross Country League.

The Striders women were first to take to the course and with a strong wind and conditions underfoot soft, heavy in places, the women had to battle hard to reach their goal of securing second place in the overall league team standings. Liza Barry started strongly and kept in touch of the leaders on the first of the two laps. As the race went on, Barry used her off road strength to hold on for a 4th place finish. Hot on her heels was the next Strider to finish, Helen Hucker, who has really impressed on the cross country circuit this season. Hucker finished in an excellent 5thplace overall on the day. Completing the scoring places for the A team was Rachel Vines who ran well to finish in 8th place. This ensured CLC Striders would claim 2nd place in the overall league team standings behind the overall winners Cheltenham Harriers.

In the Men’s race Will Ferguson knew that a league medal beckoned going into the final fixture following a number of strong performances in the league’s earlier races. After settling into the leading pack on the first lap, Ferguson found himself in 4th position on lap two, with Cheltenham Harrier Alex Lee ahead by several strides. Despite finding the ground tough going, Ferguson made his move on the third and final lap to move past Lee and into 3rd place. Ferguson would hold out for 3rd place on the day and secure victory in the Senior Male category in overall league standings.

The next Strider home was Sam Baylis who broke away from a group of runners on the final lap to ensure he would finish clear of any chasing athletes in 13th position. Chris Driskell ran strongly to finish in 21st place, completing an excellent series of personal performances on the cross country circuit this season. In his debut season, Tom Vickers was next to finish for the Striders in 61st place, with Paul Lockyer a mere 10 seconds behind in 63rd. Completing the A team for Team Striders was John Willson in 69th. The Striders contingent was completed by Javid Norat (86th) and David James (91st).

The Men’s A team finished the league in 3rd place and individual league medals were claimed by John Willson (2ndMale Vet50) and David James (3nd Male Vet65). The performances on the day confirmed another successful cross country season for the Brendan Ward coached CLC Striders who now turn their attention to road and track events in the year ahead 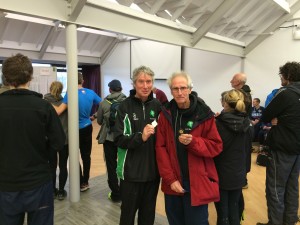