From track to trail – CLC Striders were in action last weekend.

Up in sun-bathed Tipton in the Midlands on Sunday 9 April, two Brendan Ward-coached Striders began their 2017 track seasons in earnest. Ladies captain, Rachel Vines continued her strong form by winning the 3,000m race in a time of 11.13.5 and, less than two hours later, the 1,500m in time 5.34.3. While, in the men’s 1,500m Will Ferguson led out from the start to stride to an excellent winning time of 4.18.5. Both performances bode well for strong track seasons for both athletes. 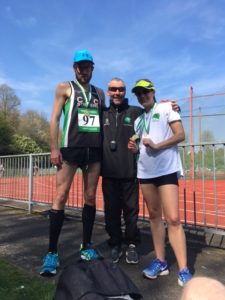 Closer to home and on a warm and gloriously sunny Sunday morning, four Striders gathered for the Chedworth Roman Trail 10-mile race. The race was as much about running in the quintessentially Cotswold countryside as it was about times, following an undulating to hilly course on tracks, roads, grassy fields and through a stream – with a few testing climbs thrown in for good measure.

Leading the Striders home, Amelia Mullins finished strongly in 1:21:55, taking 3rd LV35 spot and coming 73rd overall. Andrew Paterson, running with his dog Betty (as seen on TV!) ran well despite lots of water stops to ensure Betty was sufficiently hydrated, to finish in 1:29:24 and 145th overall. Simon Thomson had a good run to finish in 1:42:45, 271st overall, and Joanna Thomson was comfortably under the two-hour mark in 1:57:55, 389th overall. There were 428 finishers in total.

Also on the trails, but this time down in the far south of the County, Strider Rob Bircher competed in the hot and hilly off-road Old Down Country Estate 10k Race, winning his VM40 category and finishing in 12th place overall in a time of 53:11:8.