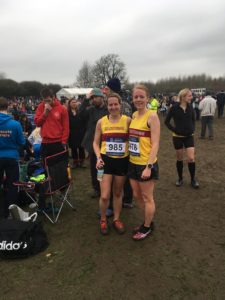 A group of 3 Striders made the trip up to Loughborough as part of the Gloucestershire Team for the Inter-Counties Cross Country Championships at Loughborough on Saturday.

The level of competition at this annual event, which on this occasion also incorporated   the Cross Challenge final and the World Cross Country trials, is always extremely high, and past winners include quadruple Olympic Champion Mo Farah who won the event in 2010.

This year for the first time in several years the race moved away from Cofton Park in Birmingham to a new venue at Prestwold Hall near Loughborough for a course, which at first glance appeared to be flat and fast, but which on closer inspection turned out to contain numerous undulations and lengthy sections of thick mud which made it tough going for the runners.

Amelia Mullins and Rachel Vines were first off for the Striders as part of the Gloucestershire Senior Ladies Team, and in a field which included GB internationals, Jess Judd and Gemma Steel, both Striders exercised sound judgement by starting sensibly as the race got off to a rapid start.  As the runners spread out and gaps opened-up, Vines’ and Mullins’ tactics paid off as they moved their way steadily up through this strong field. In her best run to date in the Inter-Counties, Vines eventually finished in 215th place and was the 4th of 6 scorers for the Gloucestershire team. Meanwhile, hot on her heels, the ever-consistent Amelia Mullins had another excellent race and finished in 234th place and 6th place for the county.  First back for Gloucestershire was Wendy Nicholls, and the eventual winner was Jess Judd followed by Claire Duck and Gemma Steel.  There were 261 finishers, and Gloucestershire were 25 out of 27 teams.

In the men’s race, Chris Driskell was flying the flag for CLC Striders in a 9-strong Gloucestershire team, which also included representatives from Cheltenham Harriers, Cirencester and Gloucester AC.  Having had a difficult time on the road at Bourton and Haresfield, Driskell struggled with the early pace and for much of the first two miles was hanging on right at the back of the field of almost 300; however, the Brendan-Ward coached athlete gradually recovered and as the runners became increasingly spaced out over the longer and flatter stretches, he began to move away from the back of the pack and was pleased to come in as 6th and final scorer for Gloucestershire and 269th place overall out of  a total of 283 finishers.  Led home by Cheltenham Harrier, Dan Owen, in 141st place, the Gloucestershire men finished 31st out of 32 teams.  At the sharp end of the race, Team GB international and Olympian Andy Vernon opened-up a gap of 25 seconds over second place runner Alex Teuten, to win the race comfortably.