It was another successful afternoon for CLC Striders at Blackbridge on Saturday both on an individual and a team level.  The women finished in an excellent 3rd place, whilst the men were a very solid 5th.  In the Masters’ contest, meanwhile, the women were 3rd, and the men were 5th.

In strengthening winds but without the heavy rain that had been forecast, the women’s race got underway first with a number of laps of the recreation field, and the Striders’ women packed well from the outset.  Laura Gush started strongly and was closely followed by Liza Barry and Helen Hucker.  As the race progressed Barry caught Gush and was in a strong position in sight of Gwen Kinsey and former Strider, Hilary Mott.  Meanwhile Hucker was working her way through the field and was closely followed by a group of Striders including Gush, ladies captain Rachel Vines, Amanda Steer, Zoe Gough, Amelia Mullins and Patricia Sturgess who is continuing to make a strong comeback.  After completing two long laps of this new course devised by Gloucester AC, Barry was first Strider back finishing in a 3rd place that never looked under threat.  Hucker was next Strider in 14th place, after a typically well-paced race; Steer ran excellently to claim 18th place; Vines ran well in 19th and was followed by Mullins who is having an excellent season and had another strong race to finish 22nd; Gough was next with a top 30 finish in 27th followed by Gush who finished in 29th.  Also running well were Patricia Sturgess in 34th; Jo Thomson in 94th; Charlie Haward in 96th and Caroline Barnes in 97th.

The men’s race followed the same course but included an additional long lap.  At the sharp end, Will Ferguson was leading the charge for Striders against some strong competition from Cheltenham Harriers.  Having chosen to sit with the pack in the initial stages of the race, the Brendan Ward coached athlete felt strong going into the second part of the race and used his class to move well past a number of Dave Newport coached Harriers including former Strider John Parker and former Bristol and West athlete Ollie Mott.  Ferguson finished in an excellent 3rd place, and is showing excellent form over the country this season.  Next home for Striders was James Oram who had another strong top 30 finish working his way through the field in a well-paced race to finish in 21st place.  Other strong performances for the men in the A team included Paul Northup and Paul Lockyer who had excellent runs to finish in 54th and 58th place respectively and JJ Willson who ran well to finish in 67th place.  In the B team, meanwhile, excellent runs were had by debutant Ben King in 81st place, men’s captain Joel Freeland in 99th place, Dan Farrelly in 106th; Gavin Jerman in 117th; David James in 127th and Martin Bick in 129th.  Also running well were Brad Coates in 136th and Dan Harte in 152nd place. 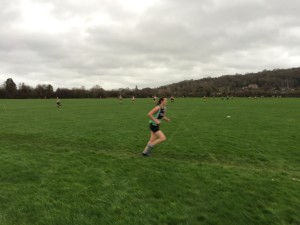