It has been a busy week for CLC Striders with club members running in events at home and overseas.

On Wednesday 9 August, a contingent of Striders headed to the Bugatti 10k.  Starting from the Prescott Hill Climb near Gretton, the course followed quiet country roads along an undulating route, with the first half of the race being largely downhill and the second half largely uphill, with the sharpest inclines in the last two kilometres. Before the race, a moving tribute was paid to Doug Waymark, a member of the Almost Athletes and endurance athlete who recently passed away whilst completing a cross-channel swim.

On Saturday, Gareth Harries flew the flag for CLC Striders in Johannesburg in South Africa. Boasting an off-road course situated at an altitude of almost 1 mile above sea level, the Rietvlei Parkrun is not one to be taken lightly, especially by those accustomed to the oxygen-rich air of lower climes such as Cheltenham.  However, Harries took it in his stride and came in 6th out of 1501 finishers in a time of 20:38.

Meanwhile, on the same day but 6000 miles away, Sophie Longmore left behind the typical wet and cold British summer to line up with 72 other nationalities to run the 37th Helsinki City Marathon.

An unconventional start time of 3pm left plenty of time for a hearty breakfast, whilst a smaller field provided shorter queues for pre-race bathroom breaks, a lot of space during the run, quick baggage collection at the end of the race and no chance of the 15 refreshment stations running out.

However large periods of the ‘undulating’ course (a hilly 20th mile is never appreciated!) were empty of both other runners and spectators, which made parts of the two-lap road course, which also included park paths, bridges and cobbles, lonely at times.

Four years on from her last marathon, Sophie finished 5th lady, 2nd in her category and 66th overall in a PB time of 3 hours, 18 minutes and 30 seconds, so all in all very much worth the trip! 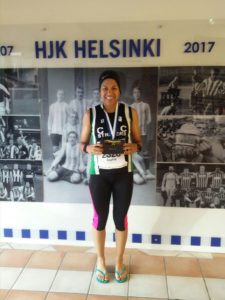 Sophie Longmore at the Helsinki Marathon