Firmly back in the Gloucestershire Road Race Series, CLC Striders’ annual 10-mile road race drew a sell-out crop of runners of all abilities from all over the region. And so, 250 entrants lined up on a mild and calm late January morning to take on the 10-mile challenge.

Using the Aviator Inn at Staverton Airport as its base, the race is a two-lap event out and back around Churchdown village from the airport.

The race was won in an astonishing, course-breaking time of 49:29 on the day by RAF athlete James Bellward, fresh from his victory in the Linda Franks 5-mile race the weekend before. James led from start to finish, running the whole race effectively on his own – a master-class in distance running and a privilege for all those there to witness. 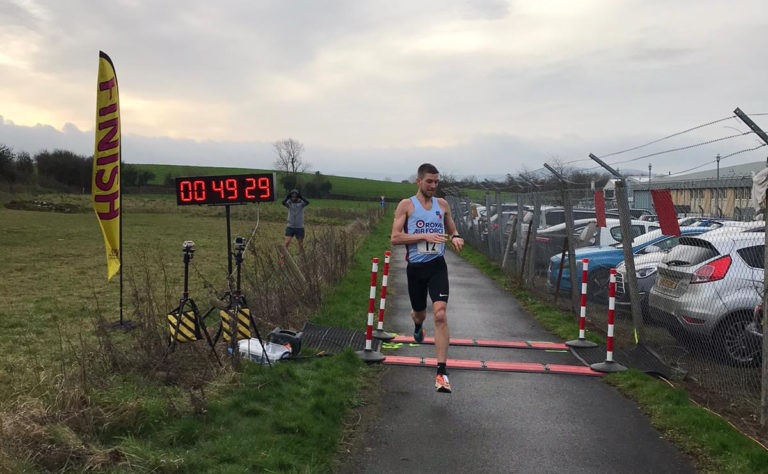 In his wake, Cheltenham Harriers’ Alex Lee ran a new PB time of 52:05 in second place, and his club mate Ben Price, working back from injury, clocked 52:49 for third.

The first lady home on the day was Kate Le-Chevalier of Pershore Plum Plodders in 1:04:31. She was followed home a minute later by the ever-reliable Shona Crombie-Hicks of Tewkesbury AC in 1:05:27, and then, two minutes later in third place, by Fiona Blackmore of Bitten Road Runners in 1:07:52.

The only CLC competitor on the day was Andrew Gage, who finished third in his MV60 category in a PB time of 1:13:46 in 71st place overall.

The feedback after the race – both at the event and on social media – has been overwhelmingly positive, with runners describing the event as a combination of well organised and friendly. Competitors were particularly complimentary about the encouraging and helpful attitude of the all the marshals.

Race Director Eoin McQuone said he was “pleased and proud that CLC Striders had once again delivered a well-organised, highly competitive and inclusive event.”

CLC Striders’ thanks go to the many supporters of the event:

And the race sponsors:

And also to the many, many club members who marshalled and helped out both before and on the day itself.

CLC will be making a donation to the local LINC cancer charity from race proceeds, as per the wishes of the local farmer Ben Pullen, across whose land the course makes its way back to the airport on each loop.