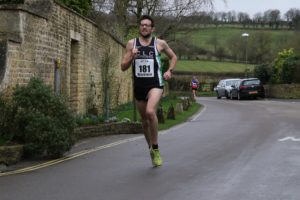 On a perfect Sunday morning for running, more than 500 competitors gathered in the picturesque Cotswold village of Bourton on the Water for the annual Bourton Road Runners 10K. Drawing athletes from all over (and with a field including former Olympian James Cracknell no less), a place in this race is much sought after and Striders were out in force, with 23 runners competing for the club on the day.

First home for the club – after what can only be described as the complete opposite of a false start (arriving a minute or so late for the off!) – was club talisman Will Ferguson, who battled incredibly hard to make up for lost time, eventually finishing in fourth place with a time of 33.59. Next home for Striders was young Jack Brown, still learning his distances, and holding on for an impressive 37th place in a time of 37:35. Consistent clubman Chris Driskell was next home in a solid 47th place in a time of 38:24. He was followed home by Paul Northup and Jon Howes, who battled the course together, finishing 56th and 60th respectively, with Northup bagging a vet 10k PB of 38:56.

The final CLC posse across the line, finishing in the 300s, were Chris Thomas, Rob Gladwin, Charlie Haward, Caroline Barnes and Amy Underdown.

All were smiling after a great morning’s running at this special annual fixture and Brendan Ward, the club’s head coach, was thrilled with the performances.